Well, it has taken me fifteen years, but I believe I have finally found the family of TRYPHENA FISHER, born about 1741, wife of CURTIS OTWELL of Maryland & Sussex Co Delaware.

In her writings about her Quaker family's history, ANN MILLIS FRAZIER WAY indicated that TRYPHENA FISHER was the daughter of HENRY FISHER, and that they were "from Ireland".

For fifteen years I have labored under this assumption, finding absolutely nothing. Now I have solid evidence that TRYPHENA FISHER was from a Maryland family, and that her father was not HENRY FISHER.

What has really helped is that the Maryland State Archives are now online with a searchable database for their records!

The first clue I discovered in the Maryland State Archives records was that SOLOMON OTWELL--who married RACHEL CURTIS & was father of CURTIS OTWELL--died 1755 in Dorchester Co Maryland, and not in Somerset Co Maryland as I had previously been led to believe. 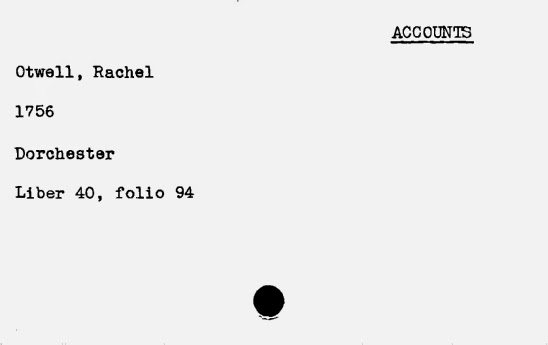 To her credit, ANN MILLIS FRAZIER WAY was only one generation off in her remembering.  HENRY FISHER of Dorchester Co Maryland was the grandfather, not father, of TRYPHENA FISHER.

JOHN PRITCHETT FISHER Sr left a will Nov 21, 1761 in Dorchester Co Maryland. Here is an abstract:


TRYPHENA FISHER  likely married CURTIS OTWELL in Dorchester Co Maryland--which is why I have never been able to find a marriage record for them in Somerset Co Maryland. I am estimating marriage in around 1769. By 1777, CURTIS OTWELL was mentioned as a landowner in Sussex Co Delaware, and his will dated April 1779 names wife TRUFENER, and children (not named).  CURTIS OTWELL was approximately 42 years old when he died.

What became of TRYPHENA FISHER OTWELL after CURTIS' death is unclear.  I did not find a will for her in Sussex Co Delaware.  According to Ed Brezenger, TRIFFINAH OTWELL, widowed wife of CURTIS OTWELL is listed in the 1790 Northwest Fork Hundred, Delaware census. I have not yet seen this record myself. Another source indicates that the entire 1790 Delaware census was destroyed in the war of 1812. So now I am very confused.

Many questions swirl around the FISHER, PRITCHETT,  & EDGAR families of Dorchester Co Maryland:  Where did they come from?  Were they Quakers, as most of their descendants were?  Did they relinquish their Quaker faith when they settled Maryland?  If they were Quakers, did they first settle in Accomack County Virginia, as the CURTIS family did, before moving to Maryland in 1661, when Virginia outlawed the Quaker religion in the colony?

And speaking of the CURTIS family... RACHEL, the wife of SOLOMON OTWELL was not RACHEL SMITH, daughter of HOLLIDAY SMITH, as has been erroneously reported in many online trees (including my own, at one time).

JAMES CURTIS married SARAH HALL Feb 2, 1685 Somerset Co Maryland.  He was apparently not a Quaker during his lifetime. His will was probated April 18, 1720, and in it he names his daughter RACHEL CURTIS.

I recently found the record for RACHEL CURTIS OTWELL which probably started the rumor that she was RACHEL SMITH.

On Feb 4, 1770 "RACHEL OWTWELL"  witnessed the Kent Co Delaware will of REBECCA SMITH:

Of course, there is no way of knowing from this will how or if RACHEL CURTIS OTWELL was related to REBECCA SMITH, and besides, SMITH was likely REBECCA's married name, not her maiden name.

Finding the will of RACHEL CURTIS OTWELL has proven to be difficult; did she die in Dorchester/Caroline Co Maryland, or in Sussex Co Delaware?

And one last thought:  JAMES OTWELL, son of TRYPHENA FISHER & CURTIS OTWELL, freed his slaves in 1800 in Guilford Co North Carolina, likely at the request of his Quaker wife, ELEANOR REYNOLDS. Were the slaves that he freed the descendants of the mulatto boy SAMBO who was willed to TRYPHENA FISHER by her father, JOHN PRITCHETT FISHER in 1761?