IF ANY OF THE FOLLOWING SOUNDS FAMILIAR TO YOU, PLEASE CONTACT ME. ANY HELP GREATLY APPRECIATED!!

CORNELIUS PAYNTER DRYDEN was born about 1825 in Pennsylvania, according to census. He appears in California voter's lists as early as 1866, in Maine Prairie, Solano Co California.

Unfortunately, I have been unable to find out much about his life prior to 1866. Here's what I've been able to glean so far:

--CORNELIUS PAYNTER DRYDEN possibly had a younger brother WILLIAM SYLVESTER DRYDEN b about 1835 Delaware, who also migrated to California, and can be found in records both in Solano Co and in Alameda, California, where he died.

--Both "Cornelius Paynter" and "William Sylvester" were well-known men who lived in Pennsylvania, Maryland or Delaware. "William Sylvester" was a Quaker, which makes me wonder if CORNELIUS' parents were Quakers. It was very common in the 1800s for Quakers to name their children after respected members of the church--even though not related.  There was a colonial Quaker DRYDEN family in Maryland. However, so far I have not found a connection between the DRYDENs and the families of CORNELIUS PAYNTER or WILLIAM SYLVESTER.

--CORNELIUS PAYNTER DRYDEN married, about 1863, SARAH SHEPHERD born about 1843 New York, both her parents immigrants from England, as per census (more on this later).  CORNELIUS was much older than SARAH, and likely had been married previously.  I have not been able to find a marriage record for them.  It is possible they married in the midwest, before coming to California, but I have no proof.

--Apparently CORNELIUS P DRYDEN died about 1873. He disappears off city directory records, but his wife & children remained at the same address in San Francisco.


SARAH SHEPHERD was born about 1843 in New York.  All census records found indicate that her parents were both born England.

--I have found census records for  a GEORGE SHEPHERD born 1798 England, who died in Lee Co Iowa.  His wife was PHEBE, also born England, and they did have a daughter SARAH  SHEPHERD who was born 1843.  I have found them in the 1850 through 1880 Lee Co Iowa census.
SARAH was listed in household 1850 & 1860.  While I have no proof,  this may well be the correct SARAH SHEPHERD.  It is entirely possible that SARAH SHEPHERD & CORNELIUS P DRYDEN married in Iowa. Further research definitely needed!

--After the death of CORNELIUS P DRYDEN,  SARAH married before 1880 to JOSEPH BOGART,  born Nov 1851 in Maine.  In the 1880 San Francisco directory, JOSEPH BOGART & his stepson GEORGE WILLIAM HENRY DRYDEN are listed in same household,  same address at 131 ½ Dora Street.

--JOSEPH BOGART was employed as a foreman for the San Francisco Bridge Company.  By 1891, he & his wife SARAH and her two daughters LULU DRYDEN and ELIZABETH DRYDEN DIECKHOFF had all moved to Seattle, Washington. JOSEPH was still employed by San Francisco Bridge company while in Seattle, building bridges & wharves (Seattle city directories).  Apparently JOSEPH & SARAH never had any children of their own.  They lived with SARAH's daughters, son-in-law and grandchildren until their deaths. 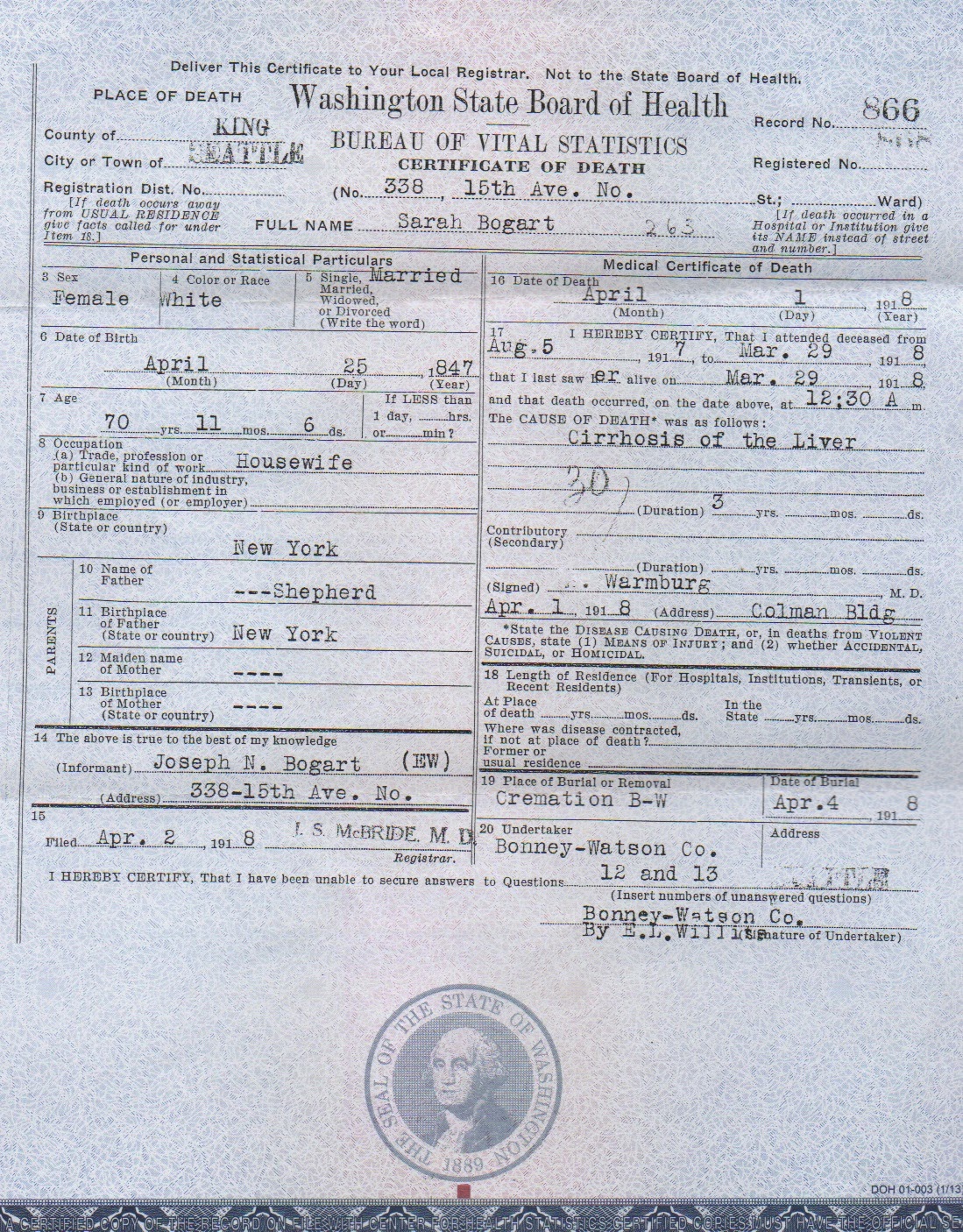 It's always a bit humbling to find out that what you believe is true is actually not.

This happened to me recently. A friend had asked me to do some research on her ancestor, who lived in Nansemond County Virginia up until about 1740 when he moved to Bertie Co North Carolina.  Since I have numerous families in my tree who made that same migration, I thought it might be time to take a  look at them, to see if my friend & I share any ancestors.

While looking for her ancestors, I began to re-examine my MOORE, BENTON & JONES families who came from Nansemond Co Virginia & settled in Chowan Co North Carolina--which later became Bertie Co North Carolina.  Since I now have more resources for Chowan & Bertie Co NC,  I thought it might be time to thoroughly document those lines to the best of my ability. I originally researched these families more than ten years ago.

As I looked through the records, I began to realized that I had made a big mistake r.e. the parents of my ancestor CHARLES JONES Sr (born about 1685 VA, died 1748 Bertie Co NC):  I had assumed that he was the son of JOHN JONES Jr of Westmoreland Co Virginia, who listed a son CHARLES in his will probated 1713.

However, every record I looked at (in Chowan Co NC, Isle of Wight Co VA, etc) showed CHARLES JONES Sr & his wife SARAH as "of Nansemond Co Virginia".

Part of my error stems from the fact that when I did the original research, over ten years ago,  I was relatively ignorant about the history & geography of Virginia, and migration patterns during the early colonial period.  Westmoreland Co VA is in the "Northern Neck" of Virginia;  Nansemond Co (now extinct), was "Southside" Virginia.  While I am not an expert by any means,  I at least now know that these two regions are quite a long ways from each other, and the chances that CHARLES JONES Sr migrated before 1700 from Westmoreland Co to Nansemond Co (although not impossible) are very slim.

I feel particularly terrible as I am certain that other researchers have copied my mistake.

After examining the records I now have at hand, I believe I have found the parents of CHARLES JONES Sr.

CHARLES JONES Sr's father was WILLIAM JONES born about 1660 in probably Nansemond Co Virginia.  WILLIAM is listed in the 1704 Nansemond Co VA tax list (as is his brother THOMAS JONES);  on Oct 4, 1704 their father JOHN JONES Sr & wife ELIZABETH (early residents of Chowan precinct)  made a deed of gift of 250 acres of land in Chowan Co NC purchased from EDWARD SMITHWICK to their two sons, WILL & THOMAS JONES.

WILLIAM JONES was married at least 3 times; earliest deed records show wife MARY; then late in life, his wife was FRANCES, and lastly MARY, who apparently died before he made his will.

Apparently there were two will drafts made in 1722 by WILLIAM JONES of Chowan precinct, Albemarle Co NC.  Because of this, WILLIAM's will was challenged in court in 1723 by WILLIAM's son-in-law, THOMAS SPEIR, but the court upheld that the 2nd draft was legal & valid.