Details of EMMA's early life are sketchy, but her first home was most definitely the rowdy, remote Sierra Nevada mining town of Bodie. Her father was an assayer, with an office in both Bodie & nearby Lundy. Her paternal grandfather, HENRY "NEW HAMPSHIRE" (H N H)  BROWN, was a Wells Fargo agent in Lundy in 1880. 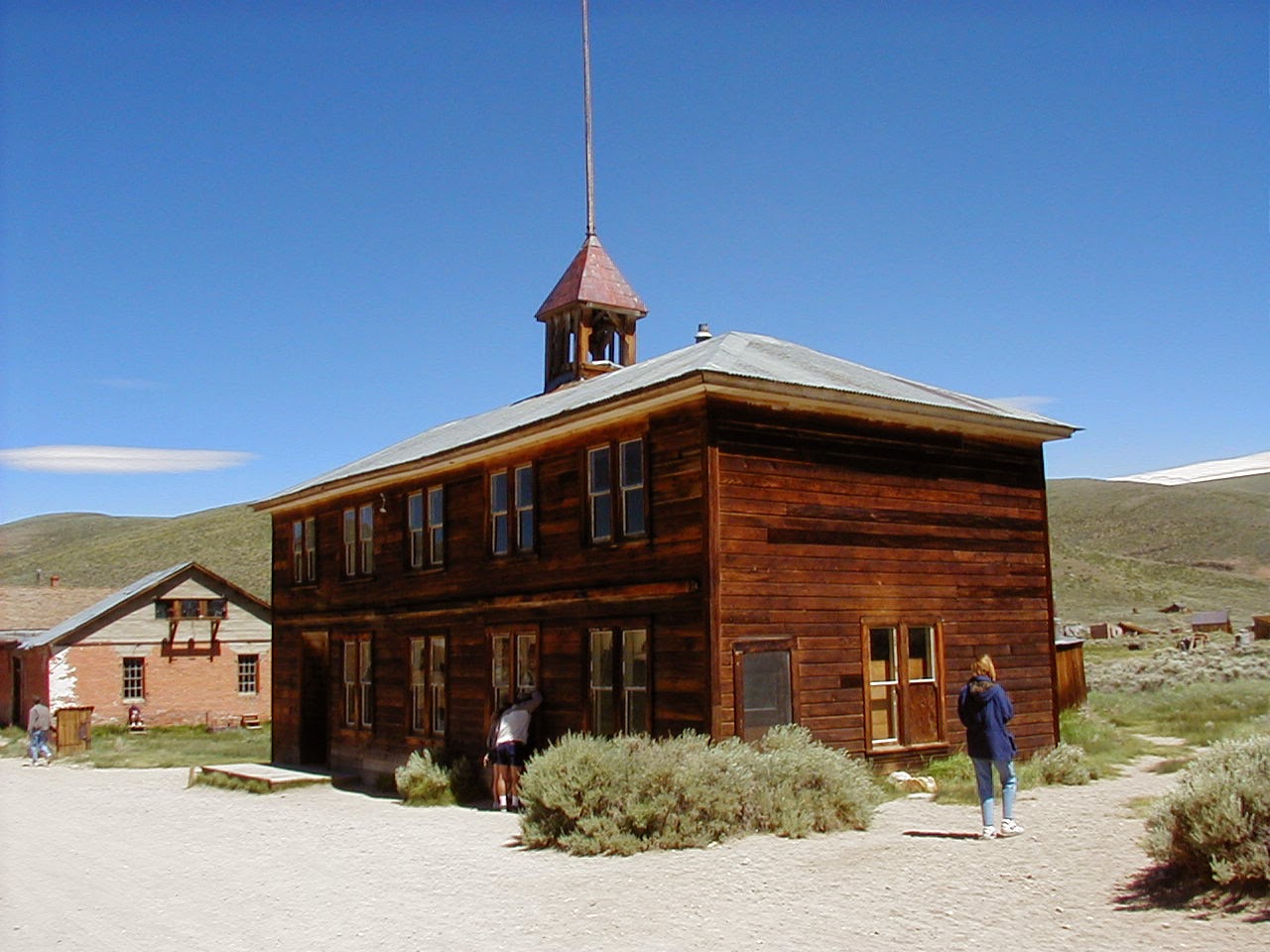 EMMA & her parents lived in Bodie from 1879 until spring of 1887, when her father FRANK sailed to Unga Island, Alaska to establish the Apollo gold & silver mine for the Alaska Commercial Company.  The family was separated for a year.  EMMA & her mother MARY ETTA stayed "down below", either in Sacramento with FRANK's father, H N H BROWN, or in San Francisco with  MARY ETTA's father, THOMAS KENNEDY.

In spring of 1888, nine year old EMMA & her mother MARY ETTA, joined FRANK R BROWN on Unga Island. They lived in the large, new, mine superintendant's house, built by FRANK & the other mine workers, supplied by the Alaska Commercial Company for FRANK, superintendent of the Apollo mine,  and his family.  This was to be the family's home until 1904, when the Apollo mine closed, and they moved back to San Francisco (note: FRANK R BROWN returned to Unga in 1914, in an attempt to establish the Delaroff Development Co, and re-work the tailings of the original Apollo Mine. While this business venture did not succeed, FRANK did continue to come to Unga Island every summer until the 1930s. I'm not sure if he purchased the old superintendant's house, or rented it from the ACC, but it seems that the old house was his residence while at Unga during those years). It's unknown exactly how many times the family sailed back & forth from Unga to San Francisco, but according to my grandmother RUBY, it was quite commonplace in the years between 1888 & 1904. They were also passengers on the mail steamer DORA. My great aunt GLADYS BROWN  was born 1889 at Onalaska, and my grandmother RUBY BROWN was born 1893 in Alameda, California. A third daughter, GENEVIEVE BROWN was born 1894 at Unga.

In 1891, EMMA BROWN, age 12, apparently attended a boarding school in Reno, Nevada, according to this newspaper item in the Daily Nevada State Journal, Aug 27, 1891:

After 1891, EMMA attended Miss JEANNE BOLTE's French & English school in San Francisco. According to newspaper accounts, she returned to Unga Island, Alaska from San Francisco in the summer of 1895.

EMMA's suicide had always been one of our family's big mysteries.  It was rarely talked about, but both my mother & grandmother intimated that EMMA had hung herself.  But as the following newspaper article in the San Francisco Call newspaper, Dec 4, 1895 shows, this was not the case: 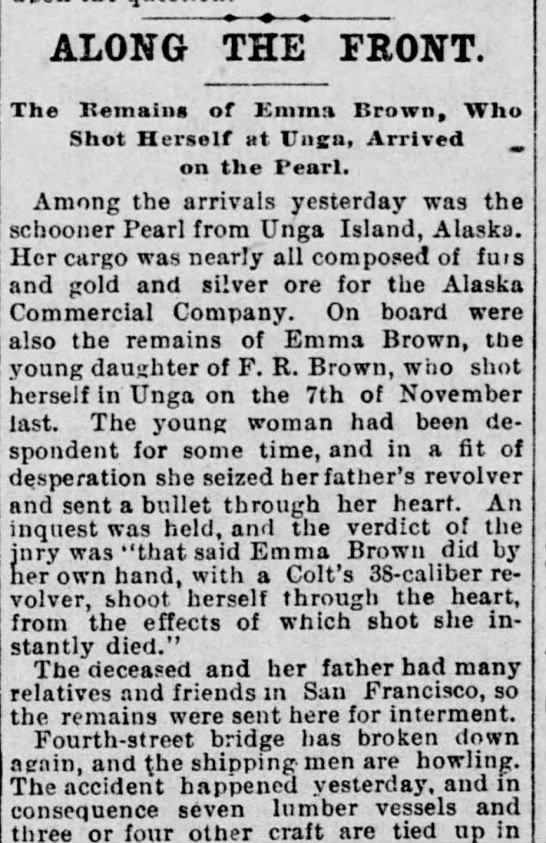 This second article clearly raises several questions, which as a genealogist, I've tried to answer:

--Where is she buried? EMMA is apparently not buried in the "new" Cypress Lawn cemetery, which was moved to  Colma, California after the San Francisco earthquake of 1906.  Her parents & other relatives are buried there, however.  It is possible EMMA's grave was destroyed in the earthquake.

--1895 death certificates & court records on the inquest into EMMA's death are not available, as they too were destroyed in the 1906 earthquake.  Newspaper accounts may be the only source available.

--J R RINES (JOSHUA R RINES) mentioned in the SF Chronicle article was not EMMA's uncle, but a distant cousin on her mother's side. He was actually the son of EMMA's great grandmother's brother.  He was one of the first letter carriers in San Francisco from 1869 until his death in 1899. 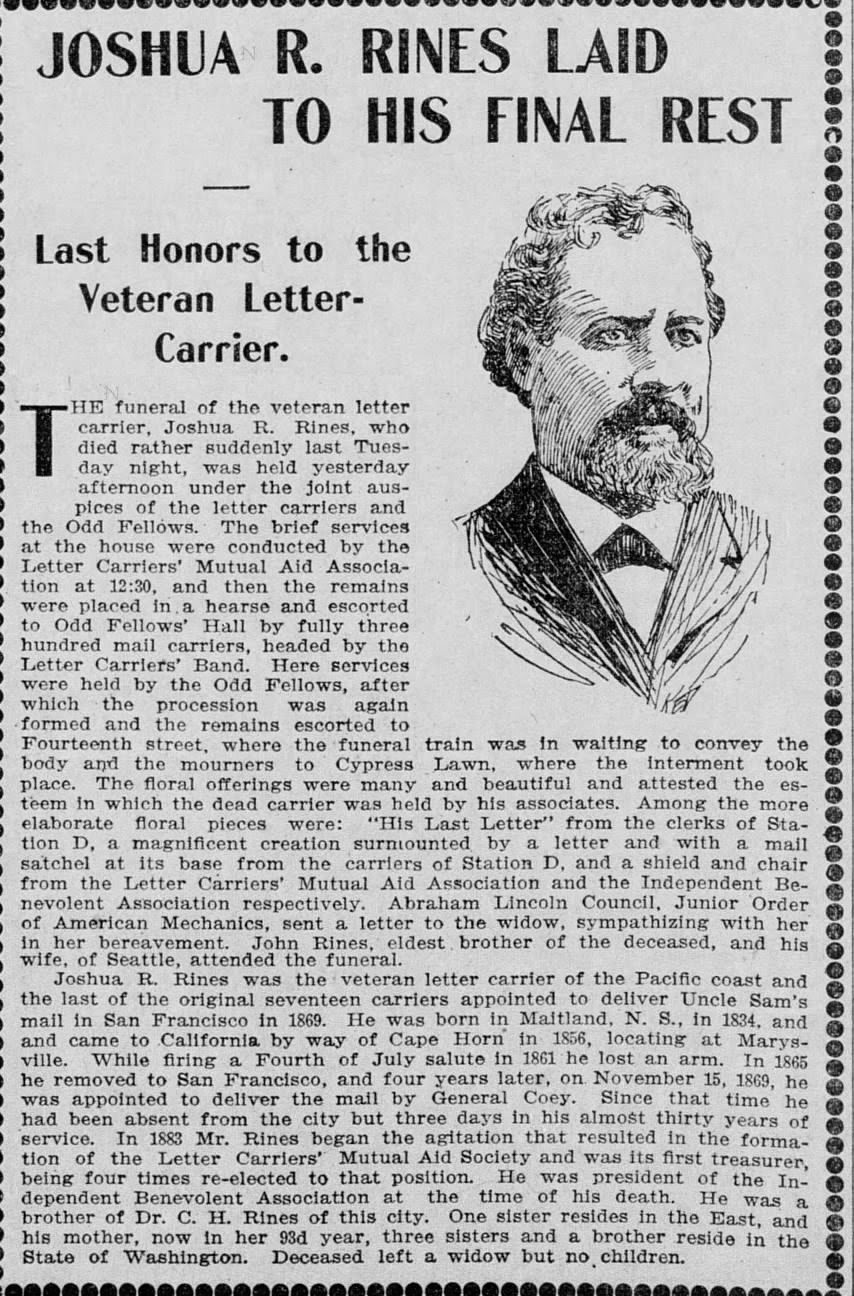 --Miss JEANNE BOLTE was convicted of child abuse in 1891, related to an incident at her school with a very young pupil.  However, she still was teaching in San Francisco from 1900--1920, as per census records, so either she served her sentence and later returned to teaching, or her conviction was overturned. 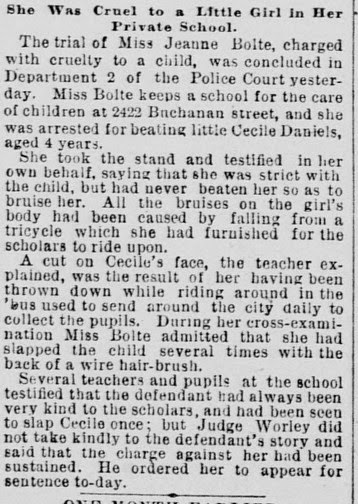 It is impossible to know what caused EMMA BROWN to choose suicide.  Clearly she was despondent. Was it cruelty & abuse at the boarding school? a failed first romance? or did the isolation & loneliness of Unga Island take it's toll on an emotional teenager??

So  while the circumstances of EMMA's death have been made clear, 120 years later, the motivation has not.  It must have been a terrible blow to her parents, who had already lost several children at Bodie, and to her sister GLADYS, who unfortunately was the first to find her.

Thanks to Carol Smith of Alaska for kindly sending me the newspaper clippings.  All photos in this article are from my personal collection.

What Will Happen to My Online Family Trees After I'm Gone?

Recently I lost a family member, and now, as  next of kin,  I'm in the process of attempting to close  down online accounts: emails, Facebook etc.

The requirements of each company or website that I have contacted so far have ranged from streamlined and straightforward to bizarrely difficult and convoluted.

This has led me to wonder how various websites deal with next of kin requests when a subscriber has died.  Will my family be able to keep my online family trees online after my demise? Will others still be able to read my blog, once I have gone to my reward?


Google:  I was able to shut down my family member's account by contacting Google, and submitting a death certificate, power of attorney document, and a copy of my driver's license. The process was very straightforward, and they company responded quickly, and told me that the information in the documents would first be "under review", then subsequently the account would be shut down.

Also, Google allows users to set up & designate an "Inactive Account Manager".   This is something that I will definitely set up for myself, as this blog is part of my Google account, and I would like it to remain available online after I'm gone!


Microsoft (Hotmail):    This company was by far the most difficult to deal with.  They require the most information on the deceased person and wanted copies of a death certificate,  power of attorney document/executorship document, and a copy of my driver's license or passport.  I attached the documents to my email response, and was told that the documents were not visible and needed to be emailed separately from text.  I did so, and was told that they still were not visible to the "Custodian of records", so I used a web-based email and apparently that solved the problem.  But then the "Custodians of records" requested that I submit proof that our parents were both deceased,  requiring both death certificates or other legal documents that would prove this. Luckily, as a genealogist, I have those documents.  Not everyone would.

When questioned about this unusually stringent requirement, the "Custodian of records" responded with this reply:  "We understand that this process can be frustrating, especially during such a difficult time, but Microsoft has strict policies in place to protect our users from unwanted access. Please understand that this department is a high target for social engineers and phishers, and we ask for the specific documents because there are those that scour the internet looking for 'inactive' accounts of the deceased."

Phishing? Seriously??? Didn't this person understand that I was attempting to SHUT DOWN my family member's account so that it could not be used by anyone else?

This Microsoft Custodian of records assured me that all documents submitted will be destroyed after the review process.

So, Hotmail users, you might want to prepare your next of kin, in case they need to close your account. Or better yet, close it yourself. Right now.

Facebook:  This company has a relatively simple process.  If you are reporting a death of a Facebook user, even if you are not next of kin, you simply send them the person's name, death date, and a link to an obituary.  Once the death is reported & verified, the Facebook account is memorialized--which means that it is still visible to friends and family, and messages can be left on deceased's page, but no "friend" requests can be sent or received.  This prevents the account from being hacked & used by someone else.  Facebook's response was very quick, and my family member's account was memorialized immediately.  Family members also have the option of deleting the account. You can also set up a "Legacy Contact" beforehand, naming someone who will look after your Facebook account after it's been memorialized.

**I don't have any experience with other social media websites, such as Twitter, Instagram, LinkedIn or MySpace; if you use those websites, you might want to check their policies & requirements.

eBay & Paypal:   Accounts are non-transferable, so family members will not be able to acquire usernames & passwords, use the account, or access funds.  Only an executor or designated trustee of the deceased can close the account.  Like other companies, the requirements include a death certificate, proof of executorship or power of attorney, and photocopy of executor's i.d.

Ancestry.com, Rootsweb.com,  Find-a-Grave, etc  I looked and looked on Ancestry.com, but could not find a specific policy about memorializing online trees, assigning a representative to maintain your  trees, how to transfer your account after your death, or even how a loved one can cancel an account for a deceased family member.  The closest thing I could find was Ancestry's policy to keep online trees online, even after an account is cancelled.  Even if an account is cancelled, the owner can still log in with username/password, can still access all info in his/her trees, can add/remove information, and can search free databases. But part of their user agreement policy states that account owners must not share usernames & passwords. So I am not at all certain about how this would work for next of kin wanting to access the online trees.

And I'm not sure what happens with Ancestry DNA results, either.

Rootsweb.com and Find-a-Grave are owned by Ancestry.com, and I was unable to find any policy regarding next of kin requests for closing accounts of deceased family members, or even how to make sure the information posted remains online.


Family Tree DNA:   This website actually has an option for setting up a beneficiary, when you register your kit, which I have done for all my family members' kits.  We are all beneficiaries for each other. I'm guessing the beneficiaries will become the new contact person for the ftDNA account. But I haven't been able to find out any further information on ftDNA's policy, or whether results & family trees remain on the website indefinitely.

23andMe:   There is a way to put multiple family members on the same profile, using the same email & password. You can do this when you register kits and establish a profile, or afterwards. If you want to do this after already establishing a profile, you probably should check out the website or contact 23andMe for more information.

Luckily, I had already done this with my deceased family member's profile when first registering his kit, so I can continue to manage his account, invite & receive matches, see new results, etc.  If you do set up a multiple member family profile, just be sure that all family members are notified and have the log-in information, so that they can access their results.

I could find no other information.  I'm guessing your results stay on the website in perpetuity, unless there is a way for next of kin to close the account.