And here is the third of the three rescued antique photo albums (see post from 4/22/17).

There was very little information inside this album to help in my search for descendants. 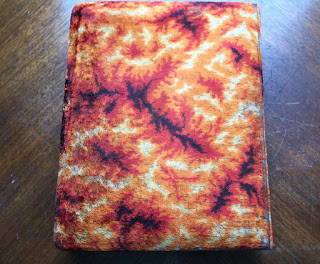 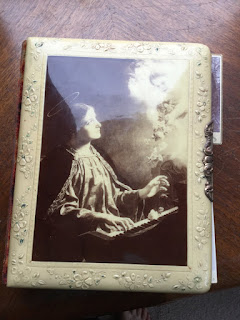 The inscription from the front of the album says "Present to ANNIE CARLSON from her uncle ANDREW DAVIDSON, 1898".  Some of the photographs were taken in studios in Lehigh, Schulyer, Norfolk & Stanton, Nebraska. One of the photos shows a young man in a band uniform with his instrument wearing a pouch or satchel that says "The Stanton Band"!

I started searching in the 1900 census in Stanton, Nebraska and hit the jackpot! ANDREW DAVIDSON & his two nieces AMELIE & ANNA CARLSON were living in the town of Butterfly in Stanton County in 1900. On same page, a few houses away,  ANDREW's brother OTTO DAVIDSON and sister CHRISTINA (DAVIDSON) CARLSON are listed

While I did not have the time to further trace these families in later census records, I did find ANDREW DAVIDSON on Find-a-Grave.

The entry indicates that ANDREW was born July 16, 1865 in Sweden, and died May 20, 1953 in Stanton, Nebraska; his sister was CHRISTINA DAVIDSON who married JOHN CARLSON (parents of ALBERT CARLSON, ELLEN CARLSON, ELMER CARLSON, AMELIE CARLSON & ANNA CARLSON in the census above). ANDREW had a brother OTTO DAVIDSON who also immigrated from Sweden in 1884. 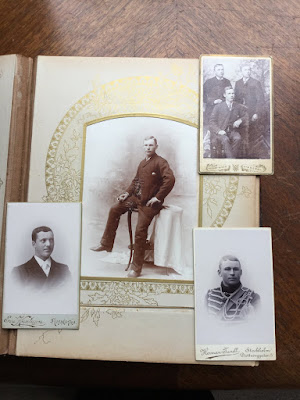 The man in center portrait and bottom right is likely ANDREW DAVIDSON, and I suspect he is the seated man in the carte de visite upper right.  The dark haired man on left I was unable to identify. The three small carte de visite were taken in Sweden (Vimmerby, Stockholm & Halmstad) in 1883. ANDREW DAVIDSON & his brother OTTO DAVIDSON emigrated to the United States in 1884. 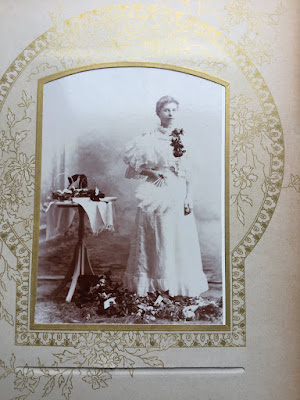 This is the first photograph in the album, and judging from the family resemblance to ANDREW, this lovely lady  is either CHRISTINA (DAVIDSON) CARLSON or her daughter ANNA CARLSON.

If you have any further information, please contact me.  I will be attempting to reunite these photos with descendants.

NOTE 4/5/17: This album has been reunited with descendants!  My work here is done!

And here is the second of the three antique photo albums that I recently rescued (see previous post).

This photo album is of the family of DAVID BRYDEN & JULIA ANN SWALLOW of Ironton, Sauk Co Wisconsin.  DAVID BRYDEN was an immigrant from Scotland. JULIA's family was from New York. The album apparently belonged to her. There are no other names or inscriptions in the album

There are over 60 portrait photographs & carte de visite in this photo album, which is remarkably well preserved.  The oldest photos appear to be from the 1860s or 1870s, the most recent from the 1900s. Some of the portraits & carte de visite were from studios in Scotland! 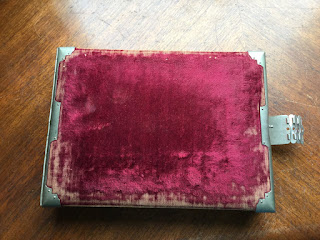 Here is the inscription from the inside cover 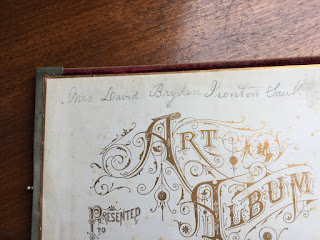 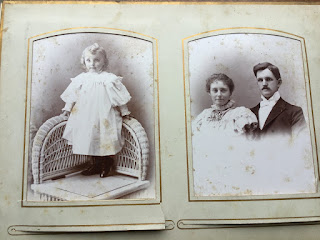 I believe the couple on right are DAVID BRYDEN Jr & EULALLA BLAKESEE, from photos that I found on Ancestry public trees.  The child is unidentified, but appears in several other portraits. The portraits were taken at a studio in Redfield, South Dakota. 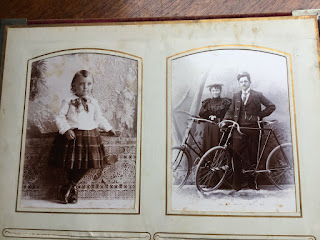 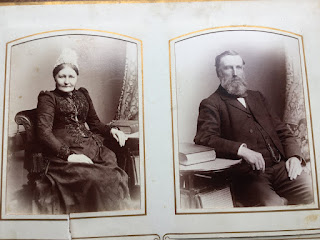 I suspect this older couple might be DAVID BRYDEN Sr the immigrant and JULIA ANN SWALLOW.

I am in the process of contacting descendants of this family. If anyone has any further information, please contact me.

NOTE 5/4/17: I'm happy to report that this photo album was reunited with a descendant!