JAMES L SAUNDERS, an educated free man of color, was born about 1843 in Warrenton, Fauquier Co Virginia, the son of  Major JORDAN M SAUNDERS born about 1795,  a white man who was a slave trader, then later a farmer, and his mulatto housekeeper/common law wife, MARY WILKINS born about 1820.

JAMES' early life was interesting.  He was born & raised on the plantation that his father owned, and was listed in nearly all census records 1850-1900 as a mulatto with the SAUNDERS surname, while his mother was consistently listed as MARY WILKINS, also mulatto.

According to several records,  including the 1860 census, JAMES apprenticed on a US Naval Man-of-War, enlisting Nov 10, 1858 at Norfolk, Virginia, and returning home to Fauquier Co in late 1860.

JAMES remained at home during most of the Civil War, until pressure & threats from the Confederate Army compelled him to go north to Connecticut, where he enlisted March 4, 1864 in the Union Army, 29th Connecticut Volunteer Infantry (Colored), under Col Wm B Wooster. He was discharged Dec 10, 1865.

After the war, JAMES returned home to Warrenton, Fauquier Co Virginia, where he worked on his father's farm. The 1870 census shows him as a mulatto, age 28.

On March 2, 1878, Fauquier Co Virginia, JAMES L SAUNDERS made a claim for reparations for his horse, which had been stolen from JORDAN SAUNDERS' farm in 1862 by the Confederate Army. JAMES had to make a deposition, which was basically a detailed interrogation, consisting of 80 questions. This entire file gives a wealth of information about JAMES: he was a school teacher in 1878, a free man of color, that he served in the US Navy, and in the Civil War in Connecticut , and the fact that JORDAN M SAUNDERS was deceased by the date of the affidavit.

Two other witnesses also made depositions, CHARLES BALL & EDWARD SHEPPERD.  Both stated that they had known JAMES since childhood, and had been raised on the same farm (they no doubt were slaves prior to Civil War).

CHARLES BALL in his deposition does clearly state that "the Claimant, JAMES SAUNDERS was the natural born son of Major SAUNDERS" -- leaving no doubt who JAMES' father really was!

The three accounts varied slightly in how JAMES came to have possession of the horse, causing the claim to be denied.

The only other record I have found so far for JAMES L SAUNDERS is the 1900 Fauquier Co Virginia census, which shows him as black male, a school teacher, wife CECELIA, and two sons FRANK SAUNDERS born Nov 1889 and CLAUDE B SAUNDERS born 1893. No idea if there were other children, or if JAMES was married previously.  I have been unable to trace this family any further than 1900.

Likewise, I have not found the will of Major JORDAN M SAUNDERS. It does not appear that he left his house & land to his children.

So who was MARY WILKINS?  She & her children were not slaves in 1850.   Perhaps she was a former slave of THOMAS WILKINS, a local plantation owner, a widow with children purchased by JORDAN M SAUNDERS, and then freed. Or perhaps she was never a slave at all, possibly the daughter of THOMAS WILKINS, a free man of color, and MARGARET PEGGY WEEKS, who married Feb 20, 1800 in Fauquier Co Virginia. PEGGY WILKINS, free person of color, is listed in the 1840 Fauqier Co Virginia census, an older woman with two young children in household. MARY is not listed with her.

Something curious happens in the 1860 Fauquier census.

All of MARY's children are listed with the SAUNDERS surname! This was before the Civil War, after which many freed slaves assumed the surname of their master. The census taker, for whatever reason, did not note the race or color of anyone on the page. Only MARY, age 40, listed as the housekeeper, retains the WILKINS surname. And even more curious & unusual is the notation that JAMES L SAUNDERS, the eldest son, had apprenticed with the a US Naval Man-of-War for two years!  I am no expert in African American genealogy, but all of this struck me as highly unusual.

JORDAN M SAUNDERS is also listed on the 1860 slave schedule, which shows that he owned twelve slaves.

Once again, only MARY is listed with the WILKINS surname.  MARY & all the children, now young adults, are all listed a mulatto, and the two sons are working on the farm.

So what was going on here?  Was MARY WILKINS, a free woman of color, the common law wife of JORDAN M SAUNDERS the former slave trader, and the father of her children? They certainly could not have married legally.  Or was MARY only his housekeeper, and he took an interest in the welfare of her children, so allowed then the use of his surname, and arranged for the eldest son JAMES to join the US Navy??

I strongly suspected the first scenario, partly because the youngest daughter LILLIE SAUNDERS was born 1858, after MARY WILKINS & her older children first show up in JORDAN's household in 1850.

Then I discovered the marriage records for two of the children of MARY WILKINS.


JORDAN M SAUNDERS is actually listed as the father of FRANK SAUNDERS!


And here is the marriage record for LILLIE SAUNDERS, who married LUDWELL CARROLL HUDNALL:


Again J M SAUNDERS as her father, and MARY as her mother!!

JORDAN M SAUNDERS died before March 1878 in Warrenton, Fauquier Co Virginia.  This is per a legal deposition made by his son JAMES L SAUNDERS, who made a claim that his horse had been stolen in 1862 by the Confederate Army, and was seeking reparation.

I have not been able to find the will of JORDAN M SAUNDERS, but from subsequent census & court records, it appears that the four children that he had with MARY WILKINS did not inherit his house or lands.

JAMES L SAUNDERS was well-educated and literate; he became a school teacher in Fauquier Co Virginia for the African American community there. His story, as far as I have been able to trace it, will be the subject of my next blog post. 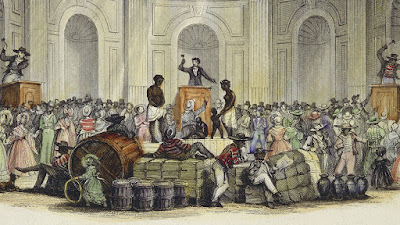 Of particular interest to me was Captain WILLIAM SAUNDERS, the youngest son of JAMES SAUNDERS Sr, who married first in 1775 to ELIZABETH MITCHELL  and second in 1795 to  NANCY CUNNINGHAM.  Shortly after his second marriage, WILLIAM moved his family to Davidson Co Tennessee, which part later became Smith Co Tennessee.  He died there in 1803.

One of WILLIAM's sons from his second marriage with NANCY CUNNINGHAM was JORDAN M SAUNDERS born about 1795 in Caswell Co North Carolina.  As I began to research JORDAN, I found that the most common remark that I encountered in published genealogies was that JORDAN never married,  had no children, and died 1886 in Warrenton, Fauquier Co Virginia. It is now my belief that none of these "facts" are correct.

This particular branch of the SAUNDERS/SANDERS family was very wealthy, educated & politically prominent in the 1700s & 1800s. JORDAN's half brother, ROMULUS MITCHELL SANDERS, was a well-known politician,  who from 1821-1827 represented North Carolina in the US House of Representatives; he was also minister to Spain 1846-1849.  Another brother, Judge LAFAYETTE SAUNDERS, married in 1826 MARY DONELSON SMITH, a relative of first lady RACHEL DONELSON JACKSON.  The wedding took place at The Hermitage, home of President ANDREW JACKSON. Judge LAFAYETTE SAUNDERS  died Aug 1848 in Clinton, East Feliciana Co,  Louisiana.

But JORDAN M SAUNDERS did not follow in his brothers' footsteps.

In about 1820, JORDAN M SAUNDERS became a slave trader, and partnered with DAVID BURFORD of Smith Co Tennessee. Their business was called J M SAUNDERS & Co, and they became agents for the infamous slave trading enterprise of Franklin and Armfield of Alexandria, Virginia.

As the business of interstate slave trading, which had started in the 1760s,  increased exponentially in the 1820s & 1830s,  speculators abounded.  It was during this time period that slaves truly became a commodity. There was money to be made, lots of it, attracting the worst kind of individuals, and creating deplorable conditions for the slaves who were being sold. Families were ripped apart. It was a heinous and utterly reprehensible business. (For more on the history of the interstate slave trade, see the book, "A Troublesome Commerce" by Robert H Gudmestad.  There is also a large collection of correspondence between JORDAN M SAUNDERS and DAVID BURFORD available in the archives of the University of Tennessee).

JORDAN M SAUNDERS eagerly took part in this business, and developed strategies to manipulate prices in order to make the most profit. Perhaps the only positive thing that can be said of him is that he was exceptionally literate, and documented what he saw in his business.

From his correspondence with DAVID BURFORD, it appears that JORDAN M SAUNDERS was living in New Orleans from about 1829-1831, and moved to Warrenton, Fauquier Co Virginia about 1830-1831

The 1840 Fauquier Co Virginia census shows JORDAN M SAUNDERS, a white single male age 40-49, with seven slaves. This is consistent with the "facts" as presented by the published genealogies.

But it was what I found in the 1850-1870 Fauquier Co Virginia census and other records that thoroughly surprised me.

I must admit it. Most of the time I am frustrated with all the tantalizing DNA matches that I receive, and with the fact that in nearly all cases, I can't quite figure out how I am related to those matches.

But sometimes a match will suddenly come sharply into focus, and when it does....WOW!!

--HARRISON "HARRY" WHITECOTTON  b 1840 Alabama or Tennessee; died after 1870  Alabama or Georgia


This has been a difficult family to trace, but over time I have been successful in researching all of these children--except for WILLIAM WHITECOTTON b 1836 (possibly died in Civil War?) and ELIZABETH WHITECOTTON b 1832.

Recently I was contacted by a GRIZZELL/GRIZZLE descendant who is a DNA match with me on Chromosome 2.  She indicated that she suspected that her great x 2 grandmother, ELIZABETH, who married WILLIAM GRIZZELL about 1850 in Hamilton Co Tennessee, was likely ELIZABETH WHITECOTTON,  the daughter of MOSES WHITECOTTON & HAPPY RIDDLE.

So could this ELIZABETH who married WILLIAM GRIZZELL and was living in Hamilton Co Tennessee by  1860 census actually be their sister?

DNA proved it so.


And here's what I have so far on the family of WILLIAM GRIZZELL & ELIZABETH WHITECOTTON:

--1860 Hamilton Co Tennessee census; ELIZABETH b 1832 Alabama with husband WILLIAM GRIZZELL b abt 1829 Tennessee, and three children, as listed below. (WILLIAM was conscripted into the Confederate Army, Capt. W.C. Kain's TN Light Artillery Company. He ended up as a POW in Camp Douglas, Chicago, Illinois, where he apparently died before the end of the war).