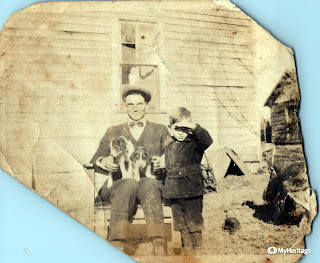 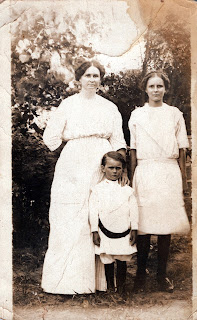 Both CONRAD CLINE & JACOB ALONZO CLINE were known to have migrated sometime before 1840 to Rush County, Indiana. Both married in that county as per Rush Co Indiana marriage records:

In the 1850 Union, Rush County, Indiana census we find

Despite that, there is definitely evidence to indicate that this MATTHIAS CLINE is the father of both CONRAD CLINE & JACOB ALONZO CLINE.

He is also listed in the 1830 Bracken County, Kentucky census, which shows:

The person who ties together both the Bracken County, Kentucky family and the Rush County Indiana family is REBECCA JANE CLINE, the daughter of MATTHIAS CLINE.

In 1840 Rush County, Indiana census GEORGE & REBECCA (CLINE) PEARL were living right next door to MATTHIAS CLINE and his wife EVE. In GEORGE & REBECCA's household were two young men too old to be their children, one male 20-29 (Dr JACOB ALONZO CLINE), and one male 10-14 (JOHN CLINE). The two eldest children of GEORGE & REBECCA, a boy WILLIAM & a girl MARGARET age 5-9, were enumerated in the household of MATTHIAS & EVE.

An 1825  deed record that I found showed that the family lived near the town of Augusta, Kentucky, right on the Ohio River.

They are not listed in 1810 Bracken County, Kentucky census, but their daughter REBECCA was born 1812 in Kentucky (Find-a-Grave shows 1809).

It is clear from census records that they had a very large family with many sons, and not all of their children have been traced.

Three of them are traceable in census records in Rush County, Indiana: JOSEPH CLINE b 1808 PA,  CONRAD CLINE b 1814  KY & HENRY CLINE b 1815 KY.  There was a LEWIS CLINE living in nearby Shelby County, Indiana who could possibly be an older son.

It is highly likely MATTHIAS was married previous to EVE, and had several children with his previous wife. EVE may have been previously married as well.

There was an ABRAHAM CLINE born abt 1797 in Pennsylvania who remained in Bracken County, Kentucky, and who may have been a son of MATTHIAS' from a previous marriage (EVE would have been age 11 at the time of his birth). The 1850 Bracken Co Kentucky census shows ABRAHAM with a son named MATTHIAS G CLINE.

MATTHIAS & EVE were both born in Maryland, which means that their respective parents probably came down the Old Wagon Road from Pennsylvania in the 1750s, settling possibly in Washington or Frederick County, as so many German immigrants did during that time period.  It is possible that MATTHIAS was born in or near Hagerstown.

I did find a MATTHIAS CLINE of correct age living in Shippensburg, Cumberland County, Pennsylvania (not far from Hagerstown MD) in the 1800 census, showing a couple age 22-44, one son age 16-25, one daughter age 16-25, and two sons under 10. This appears to be the only time period that this MATTHIAS CLINE was living in Shippensburg; he is not in previous or subsequent census records.

Clearly, lots more research needs to be done on this family! But at least records have helped to separate the two different men with the same name!


One of the fortunate parts of sheltering in place  during this time of coronavirus is having many hours to devote to genealogy research!  So for the past six weeks, I've been taking research requests from friends & family.

I was asked to research the ancestry of MATTHIAS CLINE, father of Dr JACOB ALONZO CLINE b 1822 Bracken Co Kentucky, who was married twice, 1st to REBECCA HARVEY  1 June 1843 in Rush County, Indiana, and 2nd to MARY DEMPSEY 1871 in Montana.

Practically the only document or clue relating to this MATTHIAS CLINE is a newspaper article written in 1931 Rush County Indiana about MATTHIAS'  son CONRAD "COONROD" CLINE, who also was born in Bracken Co Kentucky, and also was a resident of Rush County, Indiana.

The article states that MATTHIAS CLINE, father of CONRAD CLINE, was "of Bedford County, Pennsylvania".

Sure enough, there was a MATTHIAS CLINE of the correct age who lived in Bedford County, Pennsylvania up until his death in 1846.  He married PHOEBE SOLEY, daughter of THOMAS SOLEY, 21 September 1794 in Perkiomen Township, Montgomery County, Pennsylvania.

And as I dug deeper into this person and his family, several facts emerged which clearly show that this MATTHIAS was not the father of CONRAD CLINE and Dr JACOB ALONZO CLINE.

Fact Two:  This MATTHIAS CLINE left a will dated 21 Aug 1845, which does not name his wife, but does name his children:

His will does not include CONRAD or JACOB.

However, the will does mentions his sister BARBARA, indicating that if she bequeathed any real estate, money or property, that it was to be divided equally between his children.

The mention of a sister owning land really piqued my interest. It was not common in 1846 for a woman to own land unless she had inherited it from either her husband or her father.  Could she have been unmarried?  I began wondering if I could find this sister BARBARA, and whether or not she also migrated from Montgomery County to Bedford County Pennsylvania.

First off, I wanted to find out who MATTHIAS CLINE's parents were, if I could, to see if I could find a will which named both MATTHIAS and BARBARA.  I started by searching early census records to see exactly which CLINEs were living in Montgomery County at about the time that MATTHIAS married PHOEBE SOLEY.

I eventually narrowed the search to a MICHAEL CLINE born about 1750, who was of the correct age  to be MATTHIAS' father and who lived in Merion Township, Montgomery County, Pennsylvania from about 1785 until 1807.

Fortunately, the US Genweb site for Montgomery County, Pennsylvania had a good selection of will abstracts, and low & behold!  I found MICHAEL CLINE's 1807 will:

Later I found a copy of the original will

With a little further investigating, I found BARBARA CLINE in the 1850 census Whitemarsh Township, Montgomery County, Pennsylvania, an unmarried woman age 66, with 3 other unmarried women in household, likely boarders.  Her brother PETER CLINE  lived nearby with his family.

Rarely do I get this lucky with genealogical research!  The key factor in my success with this family was that both MICHEAL CLINE and his son MATTHIAS CLINE remained in the same location for 40-50 years, and both left detailed wills. BARBARA CLINE & her brother PETER CLINE lived in Montgomery County, Pennsylvania all their lives, and BARBARA CLINE never married. Apparently BARBARA did leave a will, but I have yet to find a copy.

But this research raised the question: if this MATTHIAS CLINE who died 1846 in Bedford County, Pennsylvania was not the father of CONRAD CLINE and Dr JACOB ALONZO CLINE, both born in Bracken County, Kentucky, then who was?