My Grandmother's Adventures: A Summer Sailing Trip Along the Alaska Peninsula, and a Shipboard Romance

In the summer of 1913, after their trip to the Grand Canyon, my grandmother RUBY BOLTON BROWN accompanied her father FRANK R BROWN  back to her childhood home on Unga Island, Alaska. This trip would become a turning point in both their lives.

FRANK R BROWN returned that year to Unga Island to discover that his friend Capt OTTO CARLSON, and another man Mr PARR were trying to establish a new mining venture, called the Delaroff Development Company, which would re-work tailings of the Apollo Gold & Silver Mine on Unga.  FRANK apparently was very interested in this venture, and became partners with Capt OTTO CARLSON.

In 1888, my great grandfather FRANK R BROWN had established, then managed the original Apollo Mine, which was owned by the Alaska Commercial Company, from 1888 until 1904. He had built the large frame mine manager's house at Unga where grandmother RUBY & her sisters grew up. 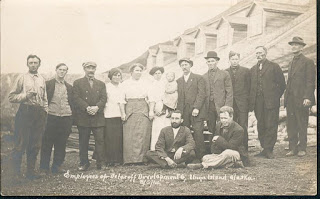 Employees of the Delaroff Development Co, Unga Island Alaska, 1914. Frank R Brown is at far right, others not identified

The Delaroff Development Company was unfortunately a flop (WWI put a stop to it--it became difficult to obtain the raw materials necessary for the operation, and labor became scarce).  In 1916, a prospector named GEORGE CUSHING claimed to have found a "new Apollo lead", and the mine and all interests were sold to E. B. DEMING, a wealthy businessman from Bellingham, Washington (interesting coincidence:  when I attended Western Washington University in Bellingham in the 1970s, I actually lived in the old Deming mansion, which had been converted to a rooming house).

So when my grandmother RUBY accompanied her father in 1913,  he was exploring the possibility of a new mining venture. According to the article she wrote about the Apollo mine, written in 1967 for the Alaska Sportsman magazine, this was the last  time she visited her childhood home.  Most of the people she had known from her childhood were gone, except for a few.

One of these few was Capt ZIMRO "ZIM" MOORE, a well-known sea captain, who had temporarily retired from the sea to act as deputy to the US Marshall on Unga Island.

Here is what my grandmother RUBY wrote in her article:

"A small sloop, the Gladys, had been built at Apollo and I shall never forget a trip four of us made on her that summer. Capt MOORE at first would not hear of my being a member of the crew; I would just be "excess baggage" in his eye. He finally consented, and the  four of us--father and I, Mr. PARR and Captain ZIM--set out in the little vessel. We slept in hammocks which were hooked up against the cabin walls during the day, and our stove was tiny, like a toy stove, although it served us well.  We anchored each night in some small harbor along the Alaska Peninsula, and I remember one day climbing a hill and looking down at the Bering Sea on the other side.

"Captain ZIM MOORE was a wonderful storyteller, and kept us in laughter as he sat at the tiller and steered the little boat.  Not long after that he returned to sea as master of the Admiral Sampson and it was a great shock to all of us when he drowned after his ship was rammed and sunk on Puget Sound the following year." 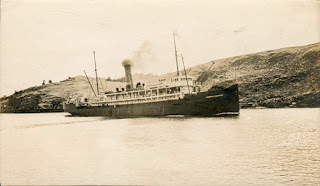 Later that summer of 1913, as RUBY and her father FRANK returned south on the steamship Dora, she met her future husband, R. B. "Rolla" MARTINE, who was traveling the Alaskan coast, appraising canneries for the General Appraisal Company of Seattle & San Francisco.  A lively & affectionate correspondence developed between them,  and on April 6, 1915, they were married in Seattle, thus beginning an adventure of a different kind. 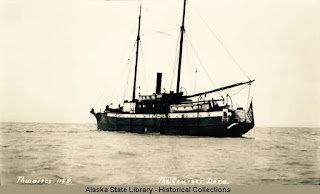 There is a wonderful book about the photographer John E. Thwaites, and the Steamship Dora's route in the Aleutians, including info on Capt ZIMRO MOORE, Unga Island, the Apollo mine & much more,   called  "Sailing the Mail in Alaska: The Maritime Years of Alaska Photographer John E Thwaites 1905-1912" by J. Pennelope Goforth.

I am certain both my grandparents & great grandparents were well acquainted with Thwaites, as they all travelled frequently on the Dora, and many of his photographic postcards have been passed down to me from my grandmother RUBY.

My grandparents lived in Seattle, where both their children were born, until 1921, when they moved to Oakland, then San Francisco, California. There they lived until 1956, when they again returned to the Seattle area. They are both buried at the Mt Pleasant Cemetery in Seattle. 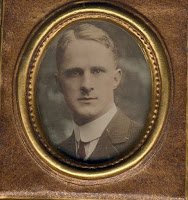 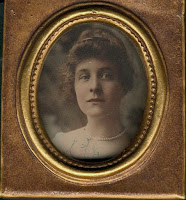 
My great grandfather, FRANK R BROWN, continued to return to Unga Island every summer, until it became physically impossible. He died June 18, 1939 at my grandmother RUBY's home in San Francisco, and is buried at Cypress Lawn Cemetery, Colma, California.

Most photos from my personal collection. 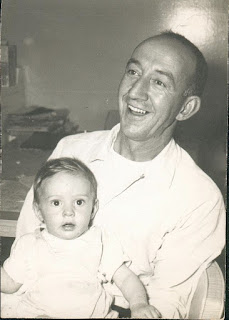 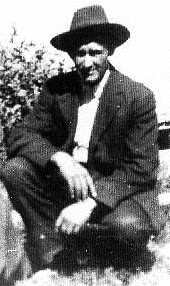 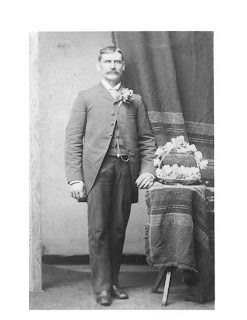 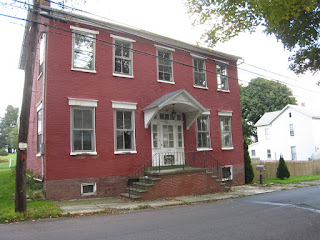 JACOB has been very difficult to trace.  I believe he was in Hagerstown, Maryland in 1776, but his whereabouts  between 1776-1793 are unknown--although I suspect in may have been in Virginia.

My Grandmother's Adventures: A Trip to the Grand Canyon 1913

When I was young, my grandmother RUBY BOLTON BROWN told us many wonderful stories about her Alaskan childhood on Unga Island.

It wasn't until many, many years later that my mother, then in her eighties, shared with me a wonderful photo of RUBY riding down into the Grand Canyon on a mule!  And it wasn't until after my mother passed away when I inherited a small photo album full of very small photos, some marked with the year "1913",  that I realized that RUBY made with trip with her father FRANK R BROWN. 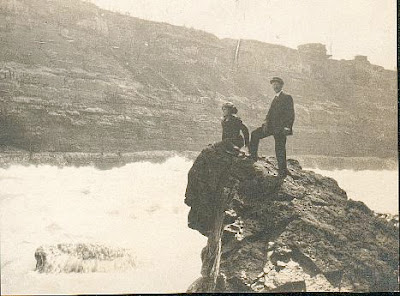 Here are the rest of the photos from the album, documenting RUBY & her father FRANK's Grand Canyon adventure. Unfortunately, no other items were saved, such as a diary, tickets or brochures, to complete the archive.

My best guess is that RUBY & FRANK took the train from San Francisco to the Grand Canyon. They probably stayed at El Tovar, the lodge designed by Chicago architect Charles Whittlesey for the Aitchison, Topeka & Santa Fe Railway, and later owned by Fred Harvey. 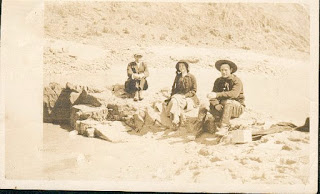 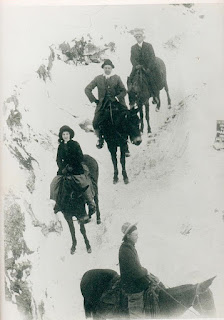 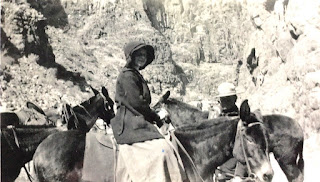 All photos are originals from my collection.

My Grandmother's Adventures: A Summer Trip to Tilton, New Hampshire in 1912 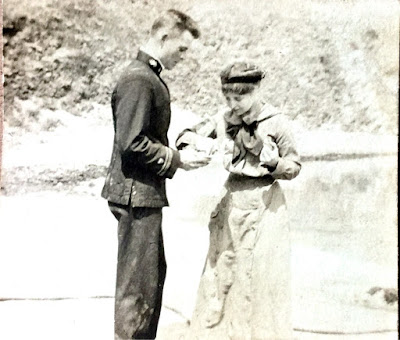 
No doubt about it, my grandmother RUBY BOLTON BROWN led quite an adventurous life, at least during her childhood and young adult years before marriage.  She was born July 17, 1893 in Alameda, California, but her family had lived on Unga Island in Alaska since 1888, when her father FRANK R BROWN built & managed the Apollo gold & silver mine for the Alaska Commercial Company.  The family sailed on schooners between Unga and San Francisco numerous times during RUBY's childhood, and later on travelled via the mail steamers "Dora" and "Admiral Sampson" when that mode of transport became more prevalent.

In 1904, when the Apollo mine closed, RUBY and her family returned to San Francisco.  But FRANK R BROWN continued to travel back to his house on Unga Island every summer until his death in 1933, and his daughter RUBY accompanied him many times.

A few years ago, after my mother died,  I found in her things a small, old photo album.  Some of the photos were of RUBY's 1913 trip to the Grand Canyon, which was already a well-loved part of our family lexicon. But the other photos were of a very large house, and a group of young people at a 4th of July picnic. Only one of the photos was marked: "Tilton, New Hampshire".

Just recently I discovered that the large house in the photos was the summer home of GEORGE GALE BROWN of Bristol & Tilton New Hampshire.  GEORGE was born Oct 20, 1837 Northfield, Rockingham Co New Hampshire, and died May 19, 1919 Tilton, Belknap Co New Hampshire, the son of BENJAMIN BUTLER BROWN & PHEBE GALE of Sanbornton.  GEORGE GALE BROWN was the uncle of my great grandfather FRANK R BROWN, and thus the great uncle of my grandmother RUBY BOLTON BROWN. 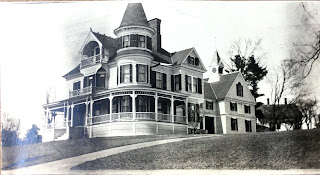 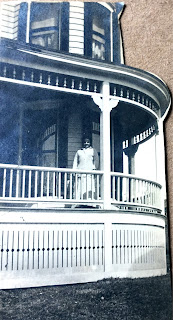 These photos of RUBY's visit to Tilton are the only indication we have that FRANK R BROWN ever corresponded with the New England family of his father HENRY "New Hampshire" BROWN (H.N.H. BROWN b 1825 Sanbornton New Hampshire, died 1894 Sacramento, California).  FRANK was not in any of the photos of the Tilton trip, so one must surmise that RUBY travelled there by herself! 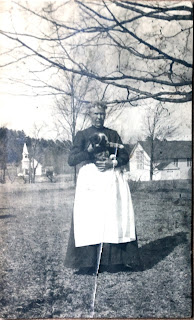 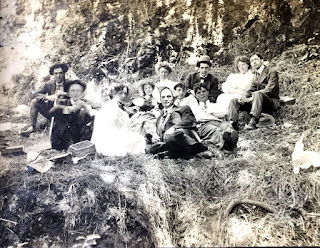 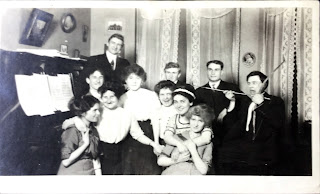 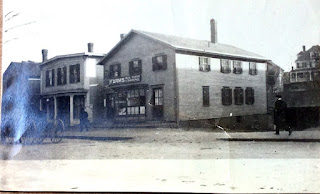 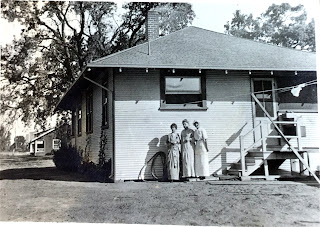 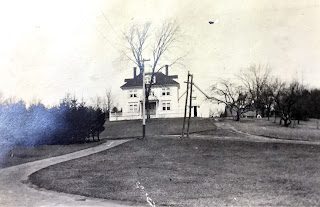 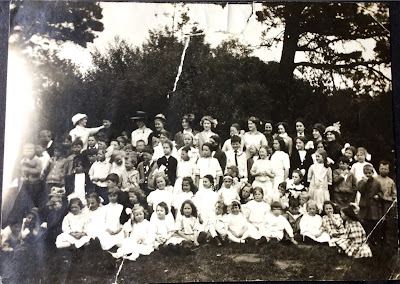 
If anyone can identify any of the individuals or locations in these photos, please contact me.  All photos are originals from my collection.  I have several more which I have not posted & would be willing to share.