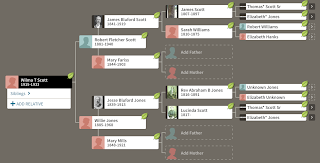 In my continuing effort to further document my SCOTT, JONES & BRUTON families of McNairy Co Tennessee, here is my research so far on the collateral line of LUCINDA SCOTT, sister of my gg grandmother, LAVINA SCOTT BRUTON.


LUCINDA SCOTT, the daughter of THOMAS SCOTT Sr & ELIZABETH JONES,  was born about 1817 in probably Rutherford Co Tennessee. She married Nov 1, 1838 to Rev ABRAHAM B JONES in McNairy Co Tennessee.  He was the son of an unknown JONES & ELIZABETH, maiden name unknown.  Rev ABRAHAM B JONES, who was born April 11, 1816 in South Carolina, does not appear to be related  to LUCINDA's mother, ELIZABETH JONES, who was the daughter of NICHOLAS JONES & MARTHA "PATSY" MOORE.

Although THOMAS SCOTT Sr migrated to Greene Co Missouri in 1846, and died there in 1849, (several of his children also moved to Missouri at same time)  LUCINDA & her husband  remained in McNairy Co Tennessee for the rest of their lives.

According to census records,  here are the children & grandchildren of Rev ABRAHAM B JONES & LUCINDA SCOTT: