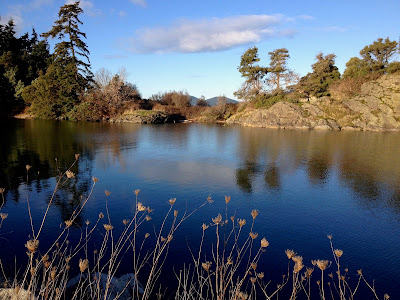 I have been working on family trees for nearly 25 years, and some days it feels as though there is nothing left to discover!  But then I will stumble onto a single document or one piece of information that will absolutely astound me!  And that is exactly what has happened recently.

Who could guess that my aunt--who lived most of her life in California-- would have ancestors who were original settlers in my hometown?!?

A few years back, I gave one of my male cousins a Family Tree DNA kit as a gift, and worked up a family tree for him, showing the lineage of his mother, my aunt, PATRICIA SUE NAGLEY (1922-1981).  A descendant from NAGLEY family kindly shared her tree, which traced the NAGLEY family back to immigration in the 1700s.

The only problem was, my aunt's  great grandfather,  JEFFERSON JACKSON NAGLEY, born July 4, 1848 Clark County, Ohio, did not appear to have ever lived with the family of JEFFERSON W NAGLEY b 1824 Clark County, Ohio & HANNAH HAWKINS--the parents that the descendant had listed for him!

At the time, I tried briefly to untangle the truth about JEFFERSON JACKSON NAGLEY, but couldn't get anywhere, so set the tree aside for awhile to work on other things

Fast forward a couple of years. Circumstances changed, and  I revisited the NAGLEY tree to make sure it was accurate and as complete as possible for my cousin, his relatives and their descendants.

The truth about JEFFERSON JACKSON NAGLEY's parents can be found in his Washington State death record. On his death certificate,  his parents were listed HENRY NAGLEY & FRANCES RODGERS. 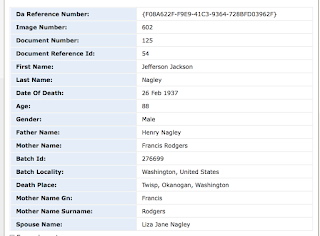 This sent me rushing back to the 1850 census for Clark County, Ohio.

Later records show that JEFFERSON J NAGLEY was not the son of ALMIRA (KIMBALL) ROGERS, but indeed the son of FRANCES M ROGERS by HENRY BRIGGS NAGLEY.

FRANCES M "FANNIE" ROGERS was the daughter of SAMUEL ROGERS & ALMIRA KIMBALL, born 27 Sep 1829 in Stowe, Lamoille county, Vermont.  Her parents had deep New England roots, but moved westward in the 1830s to the area that would become Clark County, Ohio.

FRANCES may or may not have been married to HENRY BRIGGS NAGLEY.  A marriage license for HENRY B NAGLEY & his future wife MARY JANE WRIGHT was issued 8 March 1845 when she was age 15, underage, with her parent's consent--but the court record showing that they were actually wed was never written in the record book!!  Their first child OLIVE was not born until 1848.  So far, I have not found a marriage record for HENRY & FRANCES. If they were wed, it was only for a short time when FRANCES was age 18.

In 1860, JEFFERSON NAGLEY age 12 was still living in the household of JACOB & CYNTHIA CATROW in Clark County, Ohio. It was likely that he was bound out for service with that family.

By the 1870 census, JAMES WEAVERLING & wife FRANCES were living in Jackson twp, Johnson County Missouri.  JEFFERSON NAGLEY age 21,  NEWTON NASON, age 18 and EMERSON NASON age 16 are listed in the household, as are three of JAMES' children by his 1st marriage, plus six of their own children.

In 1880 the remaining family members were living on what would come to be known as Weaverling Spit, on Ship Harbor, in Anacortes, Skagit County, Washington (This was part of Whatcom County in 1880).  JEFFERSON J NAGLEY & his wife & children lived practically next door;  another neighbor was the widow ERNESTINE DEUTSCH & her children, and a short distance away, AMOS BOWMAN, and his wife ANNA CURTIS BOWMAN, the namesake of the town of Anacortes.

JEFFERSON JACKSON NAGLEY, wife LOUISA and their family lived on Weaverling Spit in Anacortes for at least a decade. Several of their children were born in Anacortes. In 1889, the family moved to Snohomish County, and from there, over Stevens Pass to the town of Cashmere, and then Twisp,  Okanogan County, Washington.  JEFFERSON JACKSON NAGLEY died in Twisp 26 Feb 1937.

FRANCES & JAMES WEAVERLING lived on Weaverling Spit until 1894, when JAMES died. FRANCES then moved for several years to Seattle, where she married 4th) to JEROME MARFORD. She did return to Anacortes to live with her son CHARLES, and died 23 Jan 1913 in Anacortes, Skagit County, Washington.

FRANCES & JAMES WEAVERLING are both buried in Fern Hill Cemetery, in Anacortes.

Son CHARLES WEAVERLING lived & farmed on the family homestead on Weaverling Spit until the 1920s.  The land was sold, and in recent years was returned to the Samish Tribe. It is now the site of an RV park, with community access via the Tommy Thompson Trail & bike path.

Weaverling Spit  is only a short distance from my home, and I have visited many times!!

These are not photos of my ancestors, but are antique photographs which were thrown in a box and donated to the thrift store where I volunteer. Fortunately these photos have names inscribed on the backs. Many in the box did not.

My aim is to find  descendants and return these photos to their families! 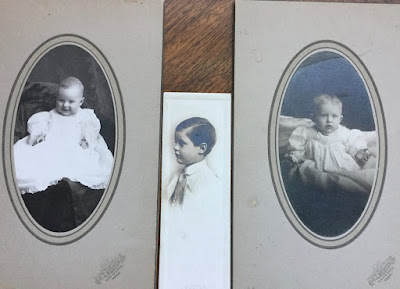 This is RICHARD CARLISLE ZEILINGER born about 1907, on left & in center, and his sister MARGARET INEZ ZEILINGER on right. The inscription on front of photos shows they were taken at the studio of H L Boston, in David City, Nebraska. 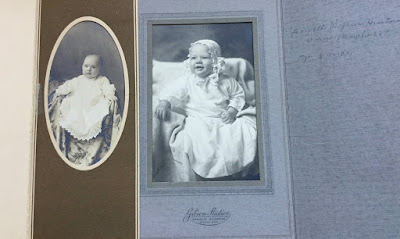 Here are photos of MARJORIE JEANNETTE HUSTON (left) and her brother LOWELL LYNN HUSTON (right) who was born March 28, 1922.  The inscription on LOWELL's photo shows it was taken at Gibson Studios Anaheim/Riverside/Santa Ana, California. 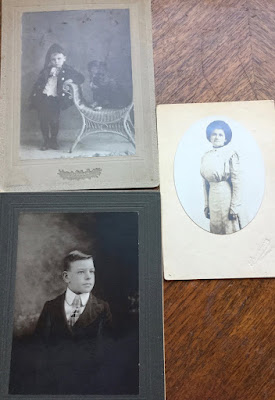 Next we have RUSSELL BALLARD (top left), his brother WALTER BALLARD (bottom left) and Mis HELEN STEVENSON (right), who might be a relation.  This family was from the vicinity of Winterset, Madison County, Iowa. 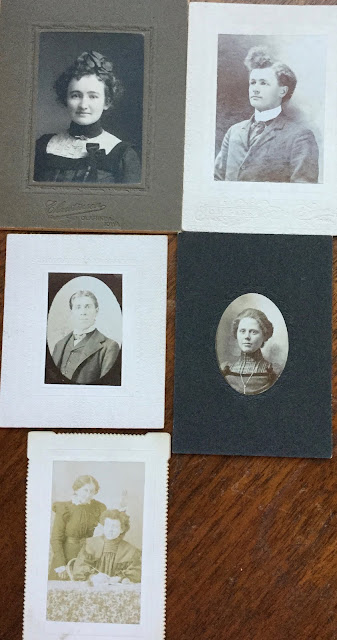 I have already found several of these individuals in online trees at Ancestry.com and will be contacting descendants. If you have any further information, please let me know!