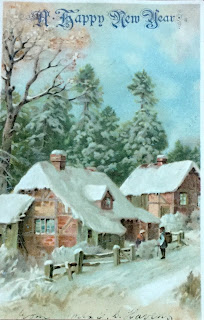 This past year I have been much more involved in researching genealogy, rather than writing about it. But as the year comes to an end, I feel I must publish at least one more blog post, just to show that I have not abandoned this blog altogether!

Here are some of the amazing developments in my genealogical life over the last decade!

--Researched and documented the Mayflower ancestors in the lineage of my maternal grandmother, RUBY BOLTON BROWN. Submitted the pedigree and documentation to the Mayflower Society in 2010; it was approved in 2011.

--Helped start a local genealogy group, Tree Climbers,  in 2011. We are still meeting every month.  Last year two of us organized and taught a "Genealogy & DNA" class for our local Senior College.

--Had my DNA tested with 23andMe, and FamilyTree DNA, then uploaded to Gedmatch, and later MyHeritage.  Most interesting genealogical adventure ever!

--Through DNA testing, discovered that my paternal great grandfather PHILLIP LUTHER HUBER, who was presumed dead in 1888 Marshalltown, Iowa, in fact ran away, remarried and started a second family in 1897 in Nashville, Tennessee.  I have several DNA matches with descendants from this second family.

--DNA testing finally laid to rest the family legend that my paternal grandmother MINTIE MAE (BRUTON) HUBER was half Cherokee through her maternal WHITECOTTON family. She was not, and they were not-- although  there is a definite connection to several Melungeon families of Southwest Virginia and East Tennessee, who have Native American, European and African ancestry.

--This past decade has seen a tremendous upsurge in new sources of records online!! With the Cornwall Online Parish Records website, I was able to trace my great x 2 grandmother CORDELIA RICKARD and her family back to the 1600's in Kenwyn Parish, Cornwall, where they lived for many generations.  Surnames include RICKARD, HICKS, GILBERT, VARLEY, GILL, WEARN/WARNE and more.   I now have solid DNA matches to descendants of Cordelia's ancestors in the US, UK, New Zealand, and Australia.

--Discovered my Canadian roots through the families of my great x 3 grandparents JOHN KENNEDY and ELIZABETH BETSY RINES. Their ancestors were Scottish immigrant to Hants County, Nova Scotia.  I now have numerous DNA matches to descendants of this couple.

--Researched the amazing and historical Virginia ancestry of my great grandmother ALICE (MILLER) MARTINE.  Earliest ancestors were at Jamestown. Many connections to both US Presidents and English royalty. And sadly, lots of plantations and slaves.

--Came to fully understand my Quaker ancestry through my paternal great grandmother CAROLINE AMELIA "CRAMELIA" FRAZIER, the wife of PHILLIP LUTHER HUBER.  Lots of abolitionists and the Indiana Underground Railway.  Many, many DNA matches to this Quaker FRAZIER family--including several matches who were adoptees, and with my extensive list of matches & well-researched tree, were able to find their birth families.

--Through DNA testing, I discovered that my 1st cousin had a son he never knew existed, born in Viet Nam, now living in Australia.  He came to the US to meet his father in 2018, and we  visited him in Australia  in 2019. One of the most wonderful experiences ever!

-- Also discovered through DNA testing that an uncle fathered an illegitimate child while he was in high school.  Sadly, the descendant of that child is very upset and not open to contact.

--Recently I have been enjoying the upsurge of new tools available to analyze DNA matches.  Personally, I have found DNAPainter to be particularly useful. Auto-clustering from Genetic Affairs can be exceptional helpful, especially if you are just starting to analyze your matches.  Thank you, Jonny Perl and Evert-Jan Blom for creating such amazing tools!


May you have a happy, healthy & prosperous New Year, filled with exciting genealogy discoveries.