After binge watching several episodes of the new season of "Who Do You Think You Are?",  I started thinking of all the genealogical discoveries I've made over the last fifteen years, both big & small.  Which discoveries were the most exciting?   Here is the list I that came up with....

1) Discovering the second life of my paternal great grandfather PHILLIP LUTHER HUBER. Even my grandfather ALONZO COX HUBER did not know what happened to his own father.  PHILLIP simply disappeared without a trace, abandoning my grandfather at a county fair in Iowa in 1882.  PHILLIP was apparently presumed dead. Turns out he ran off, abandoned his wife & three children back in Iowa, went by his middle name, married a much younger woman in Tennessee, and started a second family in Nashville.  While I can't take credit for this discovery (the theory originated with another researcher, and was later proven by DNA testing), this is the big kahuna of genealogical discoveries.  And now one of my newly found  2nd cousins has generously shared a photo of my great grandfather PHILLIP LUTHER HUBER!  So many of my 1st cousins, now in their 80s, have been able to see the face of their great-grandfather for the first time.  Genealogy doesn't get any better than this!

2) Discovering that my paternal grandmother MINTTIE MAY BRUTON was not Cherokee, and in fact not Native American at all.  Neither my brother nor I have any Native American ancestry, according to three different DNA tests (23andMe, Family Tree DNA & Ancestry.com).  While many from my father's family would argue that the tests must be wrong, and the family stories correct, this is still pretty irrefutable evidence to the contrary. I would love to have more members of my father's side of the family to get tested, but so far no one seems interested or willing.

3) Discovering the maiden name of my great x 3 grandmother HAPPY on an Eastern Cherokee tribal application. In 1906, Grandma MINTTIE MAY, her mother  (my great grandmother) SILOAMA WHITECOTTON BRUTON, and her brother JAMES J BRUTON all applied to the Eastern Cherokee tribe for tribal benefits, as they believed stories from relatives that the WHITECOTTON & STUMP families were Cherokee (their application was denied as this was not true, the WHITECOTTONs & related families were English and the STUMPs were German immigrants--not Cherokee or Native American at all!).

SILOAMA listed her mother HAPPY's maiden name on the tribal application as RIDDLE, and this new information allowed me to connect HAPPY to a RIDDLE family which is known to have Melungeon roots (and lots of women named HAPPY). This may explain the dark complexion and black hair that is so prevalent in my father's side of the family.  However--while many males from known Melungeon lines have Y-DNA that is clearly Sub Saharan African, the RIDDLE males do not.  My brother's DNA admixture shows a tiny amount  > 0.1% of Sub Saharan African ancestry on Chromosome 14--but it does not show up in my admixture.  Hard to know if this is an error, or a reflection of Melungeon ancestry without more relatives testing from my father's side of the family.


5) Discovering the identity of the "woman in the picture" found in my mother's treasure trove of family memorabilia.  It took me years to figure out who she was. Only after careful comparison of many family photos did I realize a distinct resemblance to my great aunt, GLADYS BROWN DRYDEN, and a 2nd cousin, GLADYS' granddaughter. 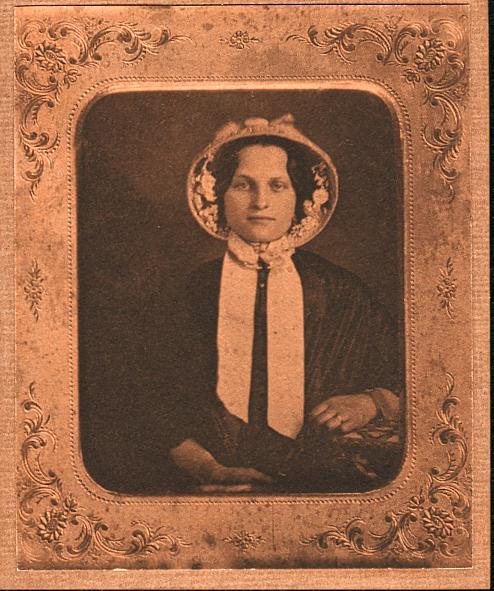 She was married previously to HENRY WILLIAM F MYERS, a German immigrant, Jan 29, 1850 in Platteville, Grant Co Wisconsin; they had one daughter EMMA before embarking on an overland journey to California that same year.  Her first husband either died along the way, or they were divorced in California (no records found).  Her brother RICHARD RICKARD, a miner, also made the journey and set up a storefront in the same area as my gg grandfather HENRY "NEW HAMPSHIRE" BROWN.

CORDELIA was born 1829 in Chacewater or Kenwyn Parish, Cornwall, England. She was the daughter of RICHARD RICKARD, a "victualer" who died 1835  at age 57 in Blackwater, Kenwyn Parish, Cornwall, and CORDELIA HICKS, who emigrated to the United States July 1845 on the ship "Henry Clay", a widow with her three youngest children (a 4th son came later). Her five eldest children either died in Cornwall before 1845,  or remained in England with their spouses & families.  CORDELIA , my great x 3 grandmother,  died April 18, 1859 in Dodgeville, Iowa Co Wisconsin.  Her daughter, my great x 2 grandmother CORDELIA, died Jan 23, 1875 in Sacramento, California.

I have been able to trace the RICKARD & HICKS families back several generations in Cornwall, using the fantastic website Cornwall Online Parish Clerks (OPC)

6) Discovering that my maternal grandmother, RUBY BOLTON BROWN, was a Mayflower descendant.  My immediate family tended to focus on the stories about our ancestors'  unusual adventurous lives in California & Alaska. Apparently no one knew anything about RUBY's extensive New England ancestry--even though we have old photos of RUBY visiting cousins in New Hampshire!  So it was quite a surprise for me to find out  that she was a descendant of JOHN HOWLAND & ELIZABETH TILLEY.  I doubt very much that my grandmother ever knew this herself--she would have definitely mentioned it!  One of my greatest genealogical accomplishments was applying to and having RUBY's pedigree accepted by the Society of Mayflower Descendants in 2011.

7) Discovering that I am a direct descendant of the first female poet in the Massachusetts Colony, ANN DUDLEY BRADSTREET.  Again, this is one of RUBY's ancestors in New England. I was particularly pleased to find this, as I was an English major in college and love poetry!

8) Discovering that my ancestor THOMAS LIGON III of Virginia had royal roots.  THOMAS LIGON was the great x 8 grandfather of my grandfather, RANDOLPH BENJAMIN "ROLLA" MARTINE, through his mother's side of the family; all her ancestors lived in Virginia from the 1600s until the 1840s when her family migrated to northern Missouri.  It was exciting to find a well-documented line from one of my ancestors back to King Edward I of England "Longshanks".  And this was not the only ancestor I found in my family tree with connection to English royalty. For THOMAS LIGON III's pedigree, see "The Royal Descents of 500/600 Immigrants" by Gary Boyd Roberts, or  "Royal Ancestry" Volume III  by Douglas Richardson.

9) Discovering the parentage of my paternal great x 5 grandmother TRYPHENA FISHER who married CURTIS OTWELL.  The Otwells of Maryland have been particularly difficult to research. Records seem few and far between, and the surname is easily misspelled or mis-transcribed  in records.  I am still trying to ascertain whether or not the family was consistently Quaker down through the early generations (in later generations after 1800 they were).

TRYPHENA remained a complete mystery for fifteen years, until I found the 1761 will of her father JOHN PRITCHETT FISHER (mother was REBECCA EDGAR) in Dorchester Co Maryland.  For years I had concentrated on  Somerset Co Maryland, where the Otwells were known to have lived, and later in Sussex Co Delaware.  It was not until I found estate records for CURTIS OTWELL's father in Dorchester Co Maryland, and turned my attention to that county, that I discovered TRYPHENA's family.  Now my burning question is this:  Were the FISHERs and EDGARs Quakers also?

What are your top ten genealogical discoveries?

What amazing discoveries! I just watched an episode of Who Do You Think You Are? where Valerie Bertinelli was also descended from King Edward I!

This post most have taken a lot of thought & time to write... & years to research! It's wonderful!