Here's a little horror story of how one error in one family tree can spread online like wildfire.

This BENJAMIN BUTLER was the son of MALACHI BUTLER & JEMIMA DAGGETT, of Edgarstown, Dukes Co Massachusetts (Martha's Vineyard).  The family also lived for a time in Connecticut, where BENJAMIN was born.

This BENJAMIN BUTLER graduated from Harvard with  a Bachelor of Arts in 1752, and a Master's degree in 1758.  He was ordained as a minister, and that was his profession for most of his life. He & his family moved after 1758 to Rockingham Co New Hampshire.

This BENJAMIN BUTLER & his wife DORCAS ABBOTT  were NOT the parents of IGNATIOUS BUTLER who was born Oct 1755 supposedly in England, and died in Bath Co Kentucky.

Sadly, I have seen over a hundred online trees with this error, particularly on Ancestry.com.

And how do I know this is incorrect?  I spent over two years researching the BENJAMIN BUTLER & DORCAS ABBOTT family & the BUTLER pedigree for application to the Society of Mayflower Descendants.  My application & pedigree were accepted as correct in 2011.

Rev BENJAMIN BUTLER left a will which was probated Jan 10, 1805 Nottingham, Rockingham Co New Hampshire and in it he lists his 2nd wife PHEBE, son HENRY BUTLER, and two daughters MARY (who married ABRAHAM BROWN) and DORCAS (who married JONATHAN CILLEY). 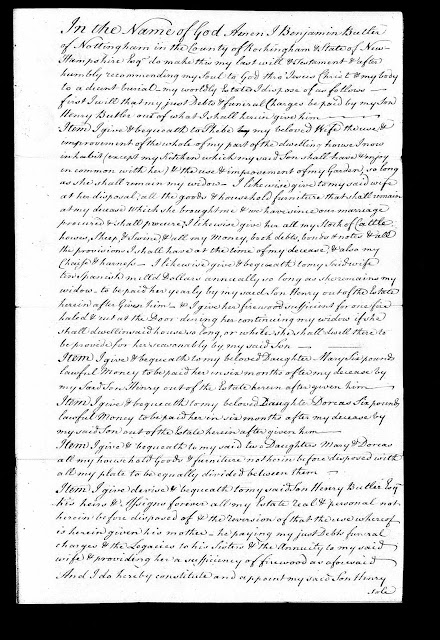 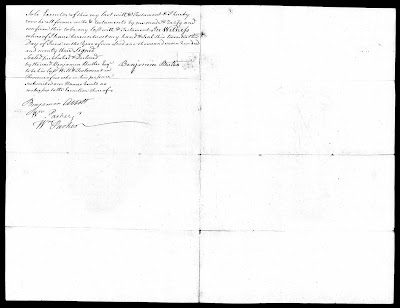 Rev BENJAMIN BUTLER had no connection whatsoever to Virginia, and was in fact attending Harvard in Cambridge, Massachusetts in 1755 when IGNATIOUS BUTLER was born in Virginia.

Or, if you don't have a subscription, here is the Rootsweb.com version

I and my mother have DNA matches that would indicate that this is debatable. DNA does not lie but of course I can't check it against Benjamin Butler or Dorcas Abbott, but trees all took different path.

Sooo....you are suggesting that you have DNA proof that IGNATIOUS BUTLER was the son of BENJAMIN BUTLER? How exactly did you come to this conclusion?

Betty, enjoyed your post -- and took a look at your tree for this family. I have a couple of other pieces of information for you. Benjamin and Dorcas had five other children who died in infancy or early childhood. You can find the low-down on those children in the following source:

Also, I have the information on the identify of Benjamin's second wife, Phebe Griffin. She was born 1 October 1751 in Andover daughter of James and Phebe (Abbott) Griffin. Dorcas Abbott and Phebe's mother Phebe Abbott were second cousins. The marriage is recorded in Andover.

Betty, would you take a DNA test and put on Ancestry? Would love to see why so many of us continue to keep going back to this Benjamin Butler.
I am in agreement with you except I do know that not every child was named in the Will and there are many possibilities for relationships unless proven by DNA.

I like DNA results. If you KNOW who you are relatives are or think you do, sometimes surprises still show up.
Still searching for Ignatious Butler parentage.
Cyndi Steinberger

I have tested with Ancestry, 23andMe, FamilyTreeDNA & MyHeritage. I first testing in 2011, and have been actively involved in genetic genealogy research on my family since then.

I have absolutely ** NO** DNA connection to any descendants of IGNATIOUS BUTLER.

Yours, Betty (the author & owner of this blog Betty's Boneyard)

Thank you, Betty!
I will check to see if you show up on any of those sites. I’m on Famiky Search
heritage
ancestry
I’m MSTOUCHUP on Ancestry

Your are right about Ignatius. It is a shame the trees on Ancestry are not corrected.

My distant cousin ,Les Butler, and I have been searching Ignatius for years. Les did the FamilyTree DNA some years ago and our Ignatius matches none of the many Butler families listed.the only "close" connection is Whitaker Henry Butler who was born in Georgia in 1800. Possible father John born in Maryland and supposedly an orphan.

Les and I believe Ignatius may be a son of Nathan Butler and Rachel Denbo(Denbow) who married in Baltimore(now Harford county)
Maryland St John's Parish in 1754.The name "Denbo" has been handed down in several of our Butler families.

Hi Betty, do you know who the parents of Dorcas Abbott were and if Keziah Butler was the daughter of this “set” of Butlers...Thank you, caught in the Butler-Abbott trap!

There is ample source documentation for both the BUTLER & the ABBOTT family of Massachusetts & New Hampshire. One source I used was the book " A Genealogy Register of the Descendants of George Abbott of Andover" by Rev Abiel Abbott.

KEZIAH BUTLER was not related to the family of Rev BENJAMIN BUTLER & DORCAS ABBOTT of Massachusetts & New Hampshire.

Yours, Betty (Author & owner of this blog Betty's Boneyard)

PS Please use a name or nickname other than "Unknown". It's the polite thing to do.

Hello.. Betty what is ur profile name for ancestry? I am on ancestry and recently done the big Y700 on familytree ..family tree has us linked to the Butlers that you guys are talking about..so some have Whitaker listed, one has a William and one has Ignatius. I have no idea whatsoever about Butlers in my line .I'm however looking for my Anderson side. I did notice Ignatius Butler is said to have a son named Anderson Butler? Then another son named his son Anderson? But I have found no link to an Anderson which in these cases is usually a mother's maiden name. Csteinberger I checked her ancestry and we do not match. Does anyone know of any Anderson connections? Hope to here from you ..thanks