This has been the case with my great x 5 grandfather, ALBERT CAMPBELL, born about 1748 in or near Clarkstown, Orange Co (Rockland Co by 1798) New York.

ALBERT was the son of WILLIAM CAMPBELL II and his wife GEERTJE STEPHENSEN of Clarkstown.  He married in Orange Co New York, in about 1772, CATHARINA/CATHERINE VAN HOUTEN, the daughter of JOHANNES ROELOFSE VAN HOUTEN & CATHARINA LEPPER.

A few years back, I was contacted by a researcher who was certain that my ancestor ALBERT CAMPBELL was the same person as his ancestor ALBERT OLIVER CAMPBELL who was a Loyalist and left for Nova Scotia Canada in July 1783 from New York City, settling May 2, 1784 in Shelburne,  then migrated to Kingston, Ontario, Canada in 1796.
(**UPDATED Note 8/17/17: This timeline of settlement is apparently incorrect, according to the United Empire Loyalists Association of Canada website, which shows that OLIVER CAMPBELL has been proven a Loyalist,  lived in Adophustown, Ontario sometime around 1784, then Cramahe township, Northumberland, Ontario by 1797. He had a land grant of 300 acres in Kingston in 1802. See my subsequent post on OLIVER CAMPBELL)

I was not so certain. I looked at all the records I could find, and came to the conclusion that ALBERT CAMPBELL of Orange/Rockland Co New York and ALBERT OLIVER CAMPBELL, Loyalist, were absolutely NOT the same person.  In the end, we had to "agree to disagree", and that was the end of it, or so I thought.....

Unfortunately, as of this date,  on Ancestry.com public trees, I have found 64 people who have copied this error.

Here is why ALBERT CAMPBELL of Orange/Rockland Co New York could not be same person as ALBERT OLIVER CAMPBELL the Loyalist:

According to historical sources, there were many Loyalist families in Orange/Rockland Co New York, in the vicinity of what is now Clarkstown, but clearly the CAMPBELLs & the VAN HOUTENs were committed to the rebellion.

Here is the census image, showing the father & sons all living in close proximity, upper left of image. 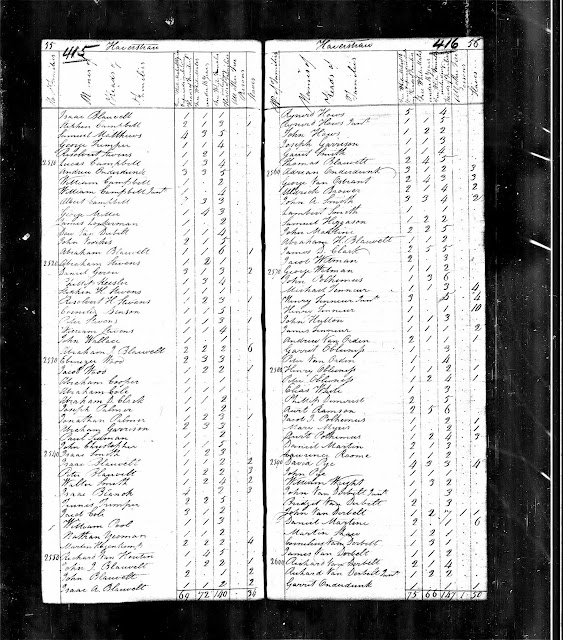 Therefore, if ALBERT CAMPBELL was living in Haverstraw, Orange Co New York (Clarkstown & Rockland Co had not yet been formed from Haverstraw), he could not be the same person as ALBERT OLIVER CAMPBELL, Loyalist.

(**UPDATED Note 8/17/17: According to many sources, Loyalists were reviled and considered traitors. They had their land & belonging confiscated and were summarily kicked out of their communities at the end of the Revolutionary War in 1783-1784.  None of this happened to ALBERT CAMPBELL. Census & Baptism records show that he was still living in the same community in Orange/Rockland Co New York over a decade after the war ended in 1783. )

Clearly, if ALBERT CAMPBELL & his wife were Loyalists who fled to Shelburne, Nova Scotia in 1784, they would NOT be coming back & forth across the border to have their children baptized at the Dutch Reformed Church in Tappan/Clarkstown in 1788 and 1791!!

And just for  comparison, here are the children of ALBERT OLIVER CAMPBELL & unknown wife, from various online trees: 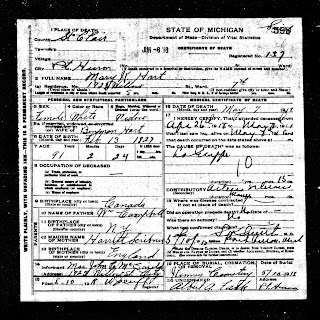 5) ALBERT CAMPBELL & his family are not listed in the 1800 Orange or Rockland Co New York census.  It is possible that ALBERT died by 1800. There is no will in Orange/Rockland Co New York, however. But what happened to his wife & children?  I only have been able to trace daughter GEERTJE "CHARITY" CAMPBELL who married ISAAC MARTINE, my great x 4 grandparents.


One more item:  ALBERT CAMPBELL's parents both had Dutch heritage, and the Dutch did not use middle names.  If anything, they would use a patronymic as a second name, and if they had done so  in this case ALBERT's name would have been "Albert Williams Campbell"  NOT "Albert Oliver Campbell".